After the dramatics of last week, I thought I might not have much to write about this week. I’d seen the doc. I had a plan. How interesting could getting back to daily life be?

You know in scary movies how you’re not supposed to say, “Be right back.” because it seals your fate as the next dead character?

Well I learned that if you say, “Sure hope I have something to write about this week.” as a blogger, it seals your fate for one bat-shit crazy week.

A while ago, a friend sent me a reminder about adding rubbing alcohol to a bag of ice so it keeps from re-freezing into a hard block so you can reuse it easily – no busting the bag trying to break up the ice.

I throw some in to my ice bag and 20 minutes later, I remove my science experiment bag of non-re-freezing ice from my knee.

EB: “I think it’s frostbite. Or maybe nip.”
(Chuckles all around)

Jaime: “Should we call Vindhya?”

Jaime: “Vindhya knows stuff. Or we can google it.”

Truth be told, this is how we figure out most dilemmas in our house. Google or Vindhya.

Turns out there’s an actual recipe for making a bag of non-re-freezing ice. And it doesn’t include ice. Oops.

My knee thaws out, regains circulation and feeling.

It also has a map of the world burned into it. Seriously.

It doesn’t hurt, just a little itchy. No biggie. Except…

See, the anti-inflammatory I was on originally was Diclofenac. Worked wonders on my knee, but destroyed my stomach. So my doc switched me to Meloxicam. Didn’t bother my stomach but was completely ineffectual on the knee.
So when I saw the doc last week, he prescribed Diclofenac again only this time, instead of taking it orally, it was a topical treatment. A salve. Worked wonders.

Until I burned a map of the world into my knee.

So that was Saturday.

Monday, I had an appointment with the surgeon (Dr. MNBF) who will do my knee replacement when the time comes. I had new X-Rays taken and then Mark and I waited for the doctor.

Dr. DB walks in. Dr. DB is doing a fellowship (I think) under Dr. MNBF. Now, I didn’t know he was Dr. DB until about five minutes into his examination when he told me I was not a good candidate for surgery and that I was essentially SOL. My favorite part was where he intimated that it was my fault that I had terrible range of motion and very little quad strength in my leg. But the part where he told me it was basically hopeless and that I was out of options? Yeah, that part was good too.

He looks at my X-Rays and checks out my knee and says something like, “We got this.”
Yes, my range of motion is bad. Yes, my quad needs to be stronger, but also, YES HE CAN HELP ME.

That’s all I wanted. Hope.

Some people are hopeless romantics.

Dr. MNBF suggests an MRI would be a good idea to make sure the rest of my knee looked ok since the range of motion and quad strength were so bad. It’s certainly better to check it out rather than over look something.

Then we scheduled a partial knee replacement for May 19, 2015.

Mark asked him about the injections I was supposed to get. Dr. MNBF essentially waved them off. “I wouldn’t get them. They aren’t going to help you enough and they will delay surgery.”

Ok. No injections. Bionic knee it is.

I had one more question though.

“Dr. MNBF, give it to me straight. Is everyone telling me I’m done teaching fitness classes because they think it’s ridiculous to replace a joint and then put that much wear and tear on it, or because I won’t  physically be able to do it?”

“Elizabeth, there is NO, I mean NO research that’s says you’ll wear out your replacement sooner with exercise. And while I cannot guarantee you will dance again, I see no reason you won’t.”

And THAT is why Dr. MNBF is my new best friend.

Before leaving, I told him about not being able to use the topical anti-inflammatory because of my ice experiment gone wrong. He prescribes Diclofenac that is paired with another medication that coats the stomach so hopefully I won’t have any other problems. There’s that word again. Hopefully.

I leave Dr. MNBF’s office feeling pretty good. I knew I was going to need a new knee and now it’s scheduled. Once I have the results of the MRI back, I can start physical therapy to work on my range of motion (just a few more degrees and I can get back to RPM!) and strengthening my quad.

I received this letter.

Glad I got it after we decided against the injections. Had Dr. MNBF said, “Yes! Get the injections!” it would have cost us $1,004. While researching this, I did find an $8 off coupon. What a bargain.

Mark and I joke about moving to Canada.

Thursday morning, I get up early to get a head start on the day. I was struggling with writing an article for work and I needed to have a productive day.

I ate my breakfast in the car and took my first dose of the new prescription, the one that’s supposed to be easy on my stomach.

Ten minutes after taking it, I was in the bathroom. I’ll spare you all the details, (Mark just breathed a sigh of relief) but I had extreme pain in my lower abdominal area. It was super centralized and I’d never felt anything like it. It was so intense and so constant that I knew something was wrong. I made my way back towards my office where two of my clients were chatting and I dropped.

“Please help me.” That’s really all I remember saying.

They called emergency services and off I went to Fairfax Hospital.

Turns out, the drug they pair with the Diclofenac to coat my stomach, Misoprostol, is also used to induce labor and clear miscarriages. My body was reacting as though it had been given a much higher dose of Misoprostol and I was essentially having contractions.

The good news was that I only took one dose and it would clear my body in 12 hours.

It is so strange to me that a drug can be used for two such different purposes, but it can be and no one made a mistake, my body just didn’t act the way it was supposed to. Who’s shocked? By a show of hands? Yeah, me either.

Mark brought me home, set me up with some orange chicken (of course) and I rested on the couch for the remainder of the day. I was feeling better by early evening and was able to keep my MRI appointment.

Is week two over yet? PLEASE?

Because it’s January and we haven’t met our deductible, our co-pay for the MRI was $740.

Plus a co-pay at the surgeon’s office, the cost of the “labor”- inducing prescription and a visit to the ER, week two ran us $1000.

I did have a few wins this week and I would not be true to the spirit of this blog if I didn’t recognize them.

It’s been one crazy week, but honestly, it’s been really eye-opening. I have spent the better part of the last decade committed to BodyJam, BodyCombat and other people’s health and wellness. This is the first week in that time that I have had to focus on me. Just me.

It’s really scary and I have so many very sad moments (putting away Jam outfits for the last time for at least 16 months and well, every Monday night at 7pm for the foreseeable future) but it has also been strangely invigorating and very positive.

It’s time to see what else I can do. 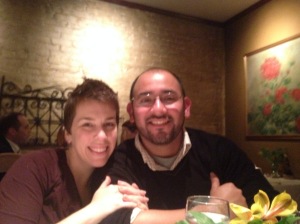 *Upon further review researching for the proper links for frostbite and frostnip, I now feel fairly certain I had mild frostbite. White, hard, skin with no feeling and I did develop a single blister. Certainly could have been way worse.*

Just a girl trying to love herself. View all posts by Elizabeth Ouellette

4 thoughts on “Taking a Knee: Nothing if Not Interesting”

You are perfect as you are. It's time to let your bright light shine in this world!

Can You Stay For Dinner?
Go Kaleo
Jessi Kneeland