Have you ever tried a new recipe over the holidays and bombed it? Or, even better, has trying something new in the kitchen paid off for you this year?

Mark and I were hosting both of our families for Thanksgiving a few years ago. While we both eat turkey as the main dish, we don’t have much else in common on the table, so instead of trying to decide whose traditions to go with, we decided we make a few of our own.

Maybe the most important difference is the stuffing, or dressing. My family makes a bread stuffing with celery, chicken stock, and butter. Mark’s family makes more of a dressing with a tomato base, garbanzo beans, pork, potatoes, and some other seasonings. We knew whichever we chose, half the room would be disappointed so we looked up a bunch of stuffing recipes and picked three to try ahead of time.

The winner? None of them. We really didn’t like any of them and definitely none were good enough to serve on Thanksgiving. Now what?

We were making two turkeys and would need to use Kate’s oven that morning as well as ours. Finally we decided we both wanted Thanksgiving the way we knew it and since Kate was already prepping one turkey, why not stuff it with our stuffing while she was at it? Mark and I would prepare his family’s recipe at our place.

It was perfect. Everyone got what they wanted and we all enjoyed a mixed-family holiday – not something we do often. Or ever, really, but I wouldn’t hesitate to host it again, now that we have a game plan we know works for everyone. 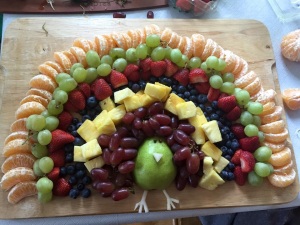