Inspired by #reverb15 and both the emotional response I felt and the general responses I received about my Day 21 (“You Being You”) and 23 posts (“Perfectionism”), I’m going to continue writing about my experiences working through my eating disorder. I have found it to be eye opening and cathartic. I’ve learned that while I always knew I wasn’t the only person in the world with an eating disorder, I still felt incredibly alone…until I heard from so many amazing people after those initial posts. The support people have shown publicly and privately has truly changed my heart for the better.

I started and stopped and restarted therapy several times in the last ten years. I met with a woman in CT before moving to VA. She no-showed on my first appointment. I stuck with it and she was fine. I talked about some stuff, but ultimately, I wasn’t ready and stopped going.

I met with a woman for over a year in 2005-2006 after moving to VA. She sat and listened to me talk for an hour, acted sympathetic but gave zero feedback. I kept a journal she read and made a few notes in every week. She sent me to a psychiatrist to determine if meds would be helpful.

The psychiatrist put me on a cocktail of antidepressants and anti-anxiety meds to start. Then he added a sleep aid. Then Prilosec  for the awful indigestion I had from the rest of the meds.

I went off antidepressants. (Slowly and it was a pretty awful detox so I can’t even imagine how it is for others with drug addiction or even just a longer usage of the meds I was on)

Turns out my depression was situational. I was lonely.

I cringe thinking about how I felt on those meds. Yuck is clearly an understatement, but it’s all I have right now.

This isn’t to say I’m anti-antidepressants. I know they help LOTS of people who need them. I am all for getting the help you need. No judgement here. I just didn’t need them and I spent a year fighting with my body, feeling crappy and in a daze, and definitely not getting any sleep.

So I met a boy, enjoyed an awesome natural mood booster, and quit that stuff.

It took me six years to realize that while I didn’t need drugs, I DID need therapy. I needed the RIGHT therapist and finding this seemingly imaginary entity was no small feat. Between trying to go through my insurance, finding someone conveniently located, and who can accommodate my ridiculous schedule, it was already close to impossible. But harder yet was finding someone who met all of those criteria and was ALSO the right fit for me.

There should be a Speed Therapy service where you to head to a bar, the organizers line up ten therapists and you get five minutes with each of them. If you think one is a match, you mark it down. Narrow from there.

I am very lucky to have a few folks in my life who deal professionally with people with eating disorders. (Editors note: That’s to all the editors who read this – not my editor. Because I’m my editor. What is it they say about people who represent themselves? Anyway – note to my editor friends and/or friends working with people with disabilities- I was sure to to use “person first” language here even though I myself would not be offended by being referred to by my disease’s name. I just want a gold star. I’m needy that way.) They were able to point me in the direction of some pretty fantastic therapists to check out first.

I met my current therapist, Beverly, two years ago. She is late every single week which drives me to need her services that much more, but the help I’ve received more than makes up for her racing into the building with twelve bags, a set of keys Schneider’d be jealous of, and about as frazzled as I’ve seen a person. Weekly.

However, I’ve made more progress with her in the last year than I ever have with anyone else or on my own. She is not a passive therapist. She calls me on shit IMMEDIATELY. I hate it, but I love it, too. She challenges me and she doesn’t let me avoid the hard stuff. I have come a LONG way in the last year alone. I’m so thankful to have found her. 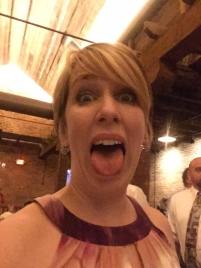 Finding my voice has taken some work. Those closest to me (and probably some not so close…) might find that funny. I never shy away from giving my opinion. I chose a professional where I literally tell people what to do all day – at times, with a microphone strapped to my head.

But the need for validation has been crippling at times and so I very often just go along with what others are saying to keep things easy. In my family, I was often the peacekeeper and the one who went along with whatever. Some of that was because I was the youngest and didn’t get married until I was 33 so it was generally easier for me to be the “bender.” Sure, I’ll make my schedule match your schedule. It’s easier for me, right? Sometimes, that wasn’t a big deal. Often, I felt like my voice didn’t matter.

I want people to like me which has resulted in agreeing to do things I really shouldn’t or really don’t want to do. This happens with my friends and at work. I am working on:

That learning curve has been a big one and in my next post, I’m going to talk about how I occasionally swing out of control “standing up” for myself.

For now though, I want to leave the following references here in case anyone might find them useful. Maybe you have struggled with an eating disorder or depression, or maybe it’s another situation for you entirely. I just urge you to “shop around” for the right person to help you. Sometimes it takes several sessions with someone to realize it’s not a good fit but regardless of when you realize it, you ALWAYS have the right and the power to find someone else. The right help for you.

2 thoughts on “My Tape: The Right Help”